Van Leuven (Dutch) – one who came from Leuven (lion), the Netherlands.

The Van Luven family may trace their routes back to the Dukes of Brabant in the Duchy of Brabant, and the counts of Leuven.  Leuven (or Louvain) is the capital city of Flemish Brabant in Belgium. 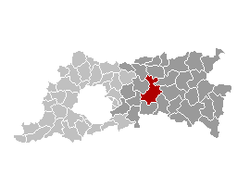 “Father and the rest were born in the Mohawk Valley.  They were called Mohawk Dutch. There was something in the family, I heard whispered when I was a boy that was not pure Dutch, and as all the Van Leuvens I know are dark with black straight hair I have come to the conclusion there is Indian blood in our veins. Reading a history I have learned the Dutch and Indians were on good terms and intermarried.  My father was very friendly with them and could speak the Mohawk language. I would like very much to know what grandmother’s maiden name was.” – Leonard Van Luven, 1915 letters

More info on the family name here:
Van Leuven Genealogy Book I
Being the history of Andreies Pieterse Van Leuven, Immigrant of 1663, and of one line of his descendants through Pieter, Andries, Benjamin and John Van Leuven in New York, Canada, Ohio, Illinois, Missouri, Utah, California.

Leonard’s mother was Henry’s second wife, Sarah T.T. King.  Sarah Thomasin Susan King was born in the UK.
Sarah’s father was John King.  Captain John King was in the Royal Navy, circa 1816, in England.  He was master of Kite, under Admiral Nelson.   He fought in the Battle of the Nile against Napoleon’s navy.

From the Burleigh Fonds: 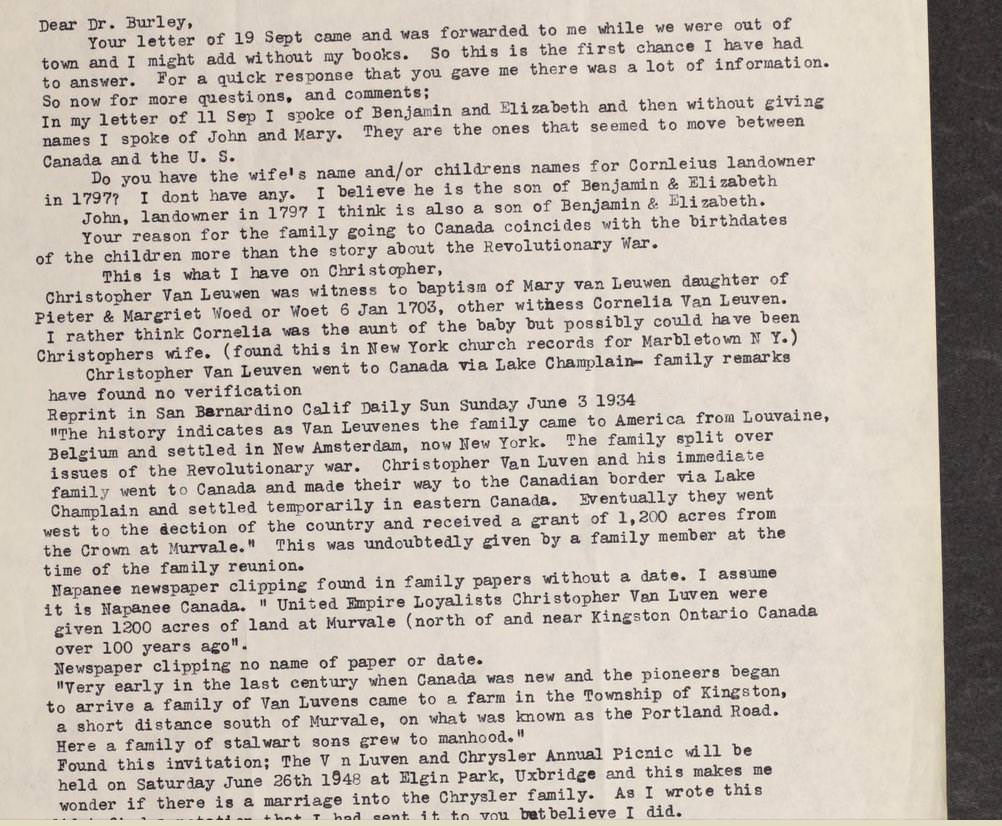 John King was wounded and retired to Nova Scotia, then Cataraqui (Kingston), Ontario.
An ancestor of John King, a long line of navy captains.

Capt. Robert King sailed under Nelson, and lost a leg at the Battle of the Nile (or Trafalgar). In compensation, he was granted three properties in Canada; one in Margaretville, one in Cataraqui (outside of Kingston), and on Rice Lake near Peterborough. He and his son, John King, were carpenters. The Cataraqui property was sold to the Bracken family; currently it is the site of an Alcan plant. (John – the son – was a choirmaster in England, and married in England prior to coming to Canada).

The Wakeford family, who had the water rights on a river flowing out of some lake[1], put out a contract for the building of 14 houses in a town which was then called Dingbat. John King, who had been working in the Kingston shipyards, won the contract to build the houses. He later suggested the name of the community be changed to Battersea.

The last four children formed a 4 voice choir; Sarah – soprano, John Henry – tenor, Edward – bass, and Mariah – alto. Ron remembered a family gathering at which some difficulties must have arisen (or been remembered); Sarah suggested they “let bygones be bygones”, and sing … and they did.

I’m still not 100% on this lineage.  There are multiple Van Luven families who immigrated from Duchess county.  According to some sources, Henry’s father was Cornelius Van Luven aka Cornelius van Leeuwen aka Cornelius Van Leuven of Rhinebeck, NY.  Cornelius’ mother was Elizabeth Knickerbocker of Germantown, NY.  Cornelius immigrated to Ernestown, Ontario in 1795 with his brother John.
http://www.genealogy.com/ftm/l/a/n/Richard-Lander-QC/WEBSITE-0001/UHP-0331.html
His Grandfather was Benjamin Van Luven.
His Mother was Elisabeth Kiefer, Grandmother Elizabeth Knickerbocker, Gr. El. Knickerbocker

During the War of 1812, Henry served under Sir Gordon Drummond, Upper Canada Incorporated Militia Battalion.  In 1814 he fought in one of the bloodiest battles on Canadian soil, the Battle of Lundy’s Lane in Niagara Falls.  He wore a green uniform and was issued a Brown Bess muzzle loading musket.

In 1816 he married his first wife, Hannah Hartman, and 2 years later they had a daughter Mary Charlotte.    Mary Charlotte would have a son named Henry Van Luven Campbell.

Lot 10: Crown to Philip Hartman, all 200 acres. In 1823, Philip Hartman sold the north half (100 acres) to Hannah VanLuven for £5. In 1826, he sold the south half to Elizabeth Hartman for the same amount. In 1836, Henry VanLuven and wife sold the north half to J.G. Switzer for £400, a substantial sum which suggests a dwelling and other improvements. Elizabeth Hartman’s south half ended up belonging to Alvin Dowling sometime before 1844.
http://www.lennoxandaddingtonhistoricalsociety.ca/ErnC6.html

When they settled north of Kingston, Henry Van Luven named the swampy, woody area VanLuvens Mills.
Henry laid out the street plan for VanLuvens Mills across 1,200 acres of crown land he purchased.  He distributed 99-year leases to families who settled in the area.
http://ireport.cnn.com/docs/DOC-15133

Later the area was called Rockville, then finally Battersea when registered as a Post Office, when Rockville was already taken and rejected as a formal name.
http://www.frontenacmaps.ca/pdf/hamlets/SF-Battersea.pdf
http://www.digitalkingston.ca/genealogy-pathfinder/storrington-township
In 1865, Cornelius Vanluven was the postmaster of Battersea, Storrington Township.
https://ogs.on.ca/kingston/pages/membersonly/2017-3_May-Jun_NL.pdf
Zara Vanluven was postmaster of Moscow, Camden East Township.

https://www.facebook.com/HolidayCountryManor/
Henry was a stone mason by trade.  The balcony on the side of his home below was likely an addition after his death.  I’m sure he would have used brick.

In 1840, he built what is now known as Holiday Country Manor (http://holidaycountrymanor.com/), an almost 10,000 square foot mansion located at 5208 Battersea Road.  The manor was built  by stone masons coming off the Rideau Canal project.
This is an interesting story about another mill owner in Loughborough creating a manmade disaster upstream, shortly after the opening of the Rideau Canal.
http://www.rideau-info.com/canal/tales/wall-water.html
The walls of the building were made of thick limestone and it is conceivable that he designed the property to ward off Fennian Raiders from across Lake Ontario, or at least the cold winters of Battersea.
I don’t know what the R-value of a 2-foot limestone wall is, however it was probably still cold in the winter, and according to the current property owners caused a lot of issues with setting up the WIFI internet reception.

In 1912 the family home was converted by his son Leonard into a fishing lodge known as Van Luven House.  Leonard’s son Karl built the Loughborough Inn afterwards.
Kingston and surrounding area has some of the nicest heritage buildings in Canada.
http://frontenacheritage.ca/about-us/gallery/

In 1874, Henry applied for form of application to Commissioners of Chelsea Hospital for a pension as a Militiaman of 1812.  I’m not sure if this means he was wounded during the war.
The Royal Chelsea Hospital  was a retirement home for the Chelsea Pensioners and an administrative office for the British Army. It was founded in 1682 and opened in 1692 to look after wounded and disabled soldiers. The hospital catered for in-pensioners but the large majority of soldiers pensioned out of the army were out-pensioners living at their own address but receiving a pension via the Royal Hospital Chelsea.
http://images.ourontario.ca/1812/72223/image/180976
https://www.familysearch.org/wiki/en/Canada_Military_Records
https://www.bac-lac.gc.ca/eng/discover/military-heritage/Pages/british-colonial-era.aspx

A map of the lots in Loughborough Township.
http://www.frontenacmaps.ca/pdf/lotcon/SF-Loughborough.pdf
In 1886, Battersea had a population of about 150 people, including Charles VanLuven, agent, and Chris VanLuven, miller.

The thriving metropolis of Sydenham, just down the road, had a population of about 500 people, including J B VanLuven, harness maker.  A few of my other relatives in Sydenham were George & Stephen Ackroyd and Albert Buck.
Peth Road, A Village in the Township of Loughboro had a population of about 100, including Ira Darlington, blacksmith and Babcock & Sears, blacksmiths, and John Sears, shoemaker.
http://www.collectionscanada.gc.ca/obj/001075/f2/e010780559.pdf
Sanford Van Luven lived on Concession 4, Lot 1 of Loughborough, a neighbour of my Great Great Grandfather Samuel Sears.
Henry and his family and other Van Luven’s had many acres of land in the areas around Kingston.

Their second son was William Woodbury ‘Bay’ Anglin (1122), born in 1867 and married in 1900 to Isabelle Farquhar. A poem which he wrote on the occasion of the installation of a bell and tower in the Battersea United Church, a gift of John Bruyiere of Florida in memory of his father-in-law, Henry Van Luven, is worth quoting here:

Sir John A. Macdonald used the current kitchen and facilities in Henry Van Luven’s house to practice law.  Coincidentally, both men died in the same year.
“William W. Anglin, 82, a former resident of Battersea, one of two CPR telegraph operators who first flashed the news of the death of Sir John A. Macdonald, Prime Minister of Canada, across Canada on June 6, 1891, is visiting his daughter, Mrs. J. E. Horton, 300 College St., Kingston.”

On June 5, 1914, an unfortunate fellow named Nelson VanLuven, age 35, spent a 3 year sentence on the wrong side of KP’s bars for false pretenses.  This was Nelson Williams VanLuven, Sydney Van Luven’s son and Henry’s grandson.
Nelson was drafted in WWI after leaving prison and moving to Michigan.
In 1923, Robert Miles VanLuven worked on the right side of the bars at the Kingston Penitentiary.  My great grandfather at least one great uncle were both prison guards at this time.

Additional information from Bill Anglin’s web site.
The Fourth Generation: Robert’s (12) Grandchildren
On the farm at Battersea, Eliza (122) and Christopher Van Luven raised four children, Frederick William Van Luven (1221), Robert Anglin Van Luven (1222), Hannah Hartman Van Luven (1223), and Charles Morley Van Luven(1224). Hannah and Morley remained on the farm with their parents, even after Fred and Rob left to enter the business world.
Fred Van Luven (1221), 1863 – 1941
Rob Van Luven (1222), 1863 – 1940
Fred (1221) and Rob Van Luven (1222) both became, in turn, travellers for the Crothers Biscuit Company of Kingston, and lived at Hedgewood, on Union Street, when so employed.
After the deaths of his parents and of Hannah, Morley moved into Kingston where he lived until his death in 1956. The parents, Hannah and Morley are all buried in the Van Luven cemetery nearby which, for a time, was sadly neglected until Dorothy, Frederick’s daughter, was able to arrange for its care.
In 1925, Crothers was sued by Williamson Candy for trademark infringement for registering Oh! Henry in Canada.  They lost on appeal.
http://www.billanglin.com/story4pt1.html
Supreme Court of Canada, Crothers Co. V. Williamson Candy Co., 1925

I put together a timeline of some events that may have influenced Henry Van Luven and the lives of his family, ancestors and descendants.