Who you gonna call?

Can I get the definition?
According to Collins English Dictionary, Aykroyd is a noun, meaning “Dan”.

Can you use it in a sentence?
He also spent time with Danny Aykroyd , Eddie Murphy and some of the other younger stars of the 1980s.

Who you gonna call?
Daniel Edward Aykroyd was born in Ottawa, Canada Day, 1952 to Samuel Cuthbert Peter Hugh Aykroyd and Lorraine Gougeon Aykroyd. He acted and co-authored the movies in the Ghostbusters franchise, with Ghostbusters III in the pipeline. As Dr. Raymond Stantz (born 1959 in Brooklyn, NY), he was a bit of a bumbling, naïve, nervous believer of the paranormal. I don’t know about the bumbling, naïve or nervous part, but Dan Aykroyd believes in ghosts too. As did his great grandfather, Dr. Samuel Augustus Aykroyd, a dentist and mystic researcher from Kingston, Ontario.

I am a Spiritualist, a proud wearer of the Spiritualist badge. Mediums and psychic research have gone on for many, many years… Loads of people have seen spirits, heard a voice or felt the cold temperature. I believe that they are between here and there, that they exist between the fourth and fifth dimension, and that they visit us frequently

Can you identify which one is the Ghostbusters Headquarters and which is a Spiritualism Church?

Spiritualism and the branch of Spiritism became popular in the late 1900s, with over 8 million practitioners. 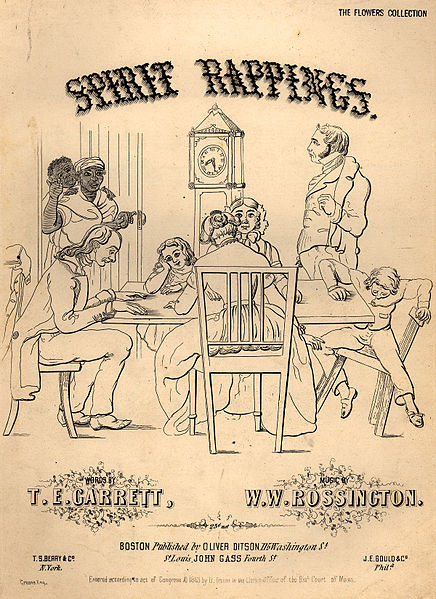 Sam Aykroyd was one of them, or at least studied them as a mystic. From what I have read, he corresponded with Sir Arthur Conan Doyle (1859-1930) on the subject of spiritualism.
Apparently Sherlock’s father had quite the effect on Canadians, including Sam Aykroyd, who had his own weekly circle of spiritualists.

Arthur Conan Doyle had a fondness for Canada that was apparent in the many positive things he had to say about our country’s natural beauty, social and economic potential, and key role in the British Commonwealth. Conan Doyle visited Canada on four occasions. The first visit in 1894 was part of a literary tour; the 1914 trip  was a pleasure tour organized by the Canadian Government to promote western tourism, and the visits he made in 1922 and 1923 were chiefly part of his efforts to promote the Spiritualist cause.

Coincidentally, and without realizing the tie-in, I visited the Sir Arthur Conan Doyle room at the Toronto Reference Library while researching the Aykroyd family name, and its tie-ins to the Sears family.
I don’t believe in coincidences. 🙂 I do believe in deja-vu, and the fact that we can see things that have happened in the past and will happen in the future, if the impressions are strong enough.
Peter Aykroyd, Dan’s father, recently released a book, “A History of Ghosts” on his ancestors and many other religion’s views on spirits.

Dan and Peter did an interview last November on it.
If you don’t believe in ghosts, The Cedars was put on the market in February. It might be a nice place to move into but I’ll pass…
A Victorian church where Sherlock Homes author Sir Arthur Conan Doyle tried to contact the dead has gone up for sale.
The Cedars Spiritualist Church in Ipswich, Suffolk – once a hotbed of British spiritualism – is on the market for between £500,000 and £700,000.
In the 1920s it hosted packed meetings where psychics would try to contact the spirits of people who had passed on.

As I was listening to it, I started browsing some of the tabs I had opened. As the interviewer asked a question about Houdini’s relation to the spirit world, I had just started reading this link, about Houdini.
http://www.cse.dmu.ac.uk/~mward/A-Magician-Among-the-Spirits-1.pdf
Coincidence?
Back to the AYKROYD family name. And Sam Sr. Sr.
Samuel Aykroyd was born Around 1810 he left Hudson, NY for Kingston, Ontario.
His son, Samuel Aykroyd II, is rumoured to have trekked across a frozen Loughborough Lake in 1826 to purchase his own land, still occupied today by the family of his great-great grandson.
His son, Samuel August AYKROYD III was born 1855 and died in 1933.
Around the time of Sam Aykroyd II was one Benjamin Aykroyd (1830-1898).
He married Jane SEARS on March 5, 1855.
Her parents were William Sears and Margaret NUTT. William Sears was the son of Hezekiah Sears. Though not a very common name today, it seemed popular in the 1900’s. Hezekiah was my great-great-great-great grandfather’s name. And his son’s name too. Though there are two Hezekiah’s living in that area from that same time period…
Benjamin’s dad was Stephen Aykroyd (1806-1851), who married Frances KNAPP. They had 9 sons and daughters in that family.
Benjamin’s son was George Aykroyd, born Christmas Eve, 1855 in Storrington, Ontario. He was a farmer in Loughborough. I assume he was a close relative of the Sam Aykroyd’s, though I haven’t found the tie-in yet. He married Althea SPIFFORD on Wednesday, November 13, 1878 at the young age of 23.

Brant Gibbard’s Geneaology Pages were invaluable for tracing my ancestry along with others, including the Aykroyd’s, who lived in the Kingston area.

Next up, the NUTT family and Farmer John Sears of Nutt’s Corners.