Urban Dictionary‘s definition of to Roebuck:

‘roebuck’ is a verb, usually used in the sense that a name is “being roebucked”. To be roebucked means that a name which in a two name company which previously had equal standing is being gradually phased out. This is derived from the company originally known as Sears-Roebuck but is now just Sears, having roebucked the Roebuck, so to speak.

Sears Roebuck and Co ceased to exist in 2004 when it became Sears Holdings .  As Sears possibly Roebucks itself out of the retail market, here’s my notes on the Roe-Buck family name.
From Familysearch:
The Roebuck name is English, originating around Kent and Somersetshire section of England where it has been known for many generation as a very well known and ancient family. The name Roebuck means – a dweller at the sigh of the male roe deer. This could have meant a sigh on an inn, or where deer were often seen.
The first roebucks to come to America came to Virginia. On February 15, 1635 two brothers, George and John Roebuck sailed on the ship, PLAIN JOAN with Captain Richard Buck as the Master. They had taken the oath of allegiance to the King and Conformities to the church before being allowed to sail. They paid their own passage rather than being indentured to some one else for their fare as so many at that time, which shows they we~e people of some means to be able to do so. There is a record of George Roebuck on the quit rent (tax list) in Surry County, Virginia for the year 1704 as paying taxes on 70 Acres of cleared land. The first official census was taken in 1790. It showed two Roebuck in Martin County (the only ones in N.C.).
Captain Richard Buck of the Plaine Joan (Plain Jane) may have been Richard Buckman according to this passenger list.
From Surname Database:
This unusual and interesting name is of Anglo-Saxon origin, and has two possible sources. Firstly, it may derive from a nickname for a shy or timid person, from the Olde English pre 7th Century “ra” and “bucc”, roe-buck. many early English surnames were developed from the habitual use of nicknames, which were frequently bestowed with reference to some fancied resemblance to an animal’s or bird’s appearance or characteristic behaviour other modern surnames derived from the Olde English “ra” and “raege” (female deer), are Ray, Roe, Raye, Reye and Rae. The Development of “Roebuck” as a surname includes Matilda Robuc (1297, Yorkshire), and Richard Rabuk (1379, ibid). The modern surname may also derive from a “sign-name” where the original bearer lived “at the sign of the roebuck”, as in one William atte Robuck, recorded in Parliamentary writs of 1313. One John Roebuck was christened at St. Andrew’s, Holborn, in London, on May 11th 1639. The first recorded spelling of the family name is shown to be that of Adam Rabuck (witness), which was dated 1246, witness in the “Assize Rolls of Lancashire”, during the reign of King Henry 111, known as “The Frenchman”, 1216 – 1272. Surnames became necessary when governments introduced personal taxation. In England this was known as Poll Tax.
According to the Roebucke/Roebuck Family History, The Roebuck Family Guarded the King of England’s Roe Deer around the castle.

It is said that prior to leaving Wales the family had been in the kings service as foresters or literally guardians of the kings deer, thus the name Roebuck. Was RABUK, ROBUK,ROBUC, and ROEBUCK and they were found mostly in Yorkshire, England, by the 14th century.
In 1746, John Roebuck invented leaden condensing chambers for the manufacture of sulphuric acid.

In 1770s, there was also a class of 44-Gun ships built with the Roebuck name. 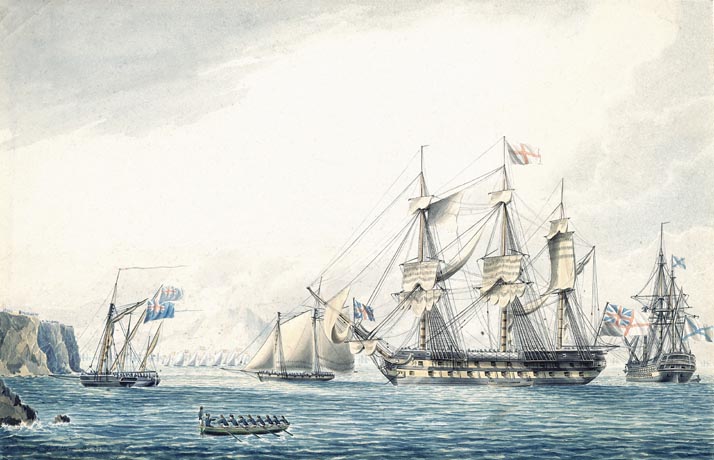 H.M.S. Roebuck was the nameship of a class of twenty fifth rates even though she herself was completed before any of the others had been laid down. Roebuck’s keel was laid in Chatham dockyard in October 1770 and she was launched on 28 th April 1774. Measured by her builders at 886 tons, she was 140 feet in length with a 38 foot beam, and mounted 44 guns in total comprising 20x­18 pounders, 22x­9 pdrs. and 2­x6 pdrs.
In 1802, John Arthur Roebuck was born.  He was a radical politician and lawyer, at one point living in Upper Canada before moving back to England and serving in Parliament.
He championed the cause of self-government for Canada and other colonies of the British empire in his book, The Colonies of England: A Plan for The Government of Some Portion of Our Colonial Possessions.

Canada is not a nation–she is–a colony–a tiny sphere, the satellite of a mighty star, in whose brightness she is lost.  Canada has no navy, no army, no literature, no brotherhood of science.  If, then, a Canadian looks for honour in any of these various fields, he must seek it as an Englishman; he must forget and desert his country, before he can be known to fame.  We must not then wonder if we find every intelligent and ambitious Canadian with a feeling of bitterness in his heart—because of his own inferiority of condition.
…
I seek to frame a polity which contemplates the colony in its commencement–in its infancy–and onward in its course, till it becomes an established and self-governing community; my polity then seeks to unite thisself-governing state with others, having the same interests and living under the same laws and according to the same rule of government.  Thus my plan proceeds preparing for a continually increasing power and importance–providing a secure and comfortable subsistence for the humble millions who constitute the large majority of the people–and opening a career of honourable ambition for the more aspiring leaders, by whom the peopel will be guided, ruled, and led.
It’s interesting, in Canada’s 125th year of existence as a formal self-governed country, how influential this Roebuck may have been on the original founding fathers and their overseas overseers.
His biography has more information on his Life in Canada as a young man.
The wild country, its great rivers, the vast scale upon which everything was framed, made on me a profound impression. The freedom in which we lived, the thorough liberty of going where we liked, the new scenes, brought with them a sort of enchantment. All efforts would fail were I to endeavour to describe them.…The population of the district mostly consisted of the descendants of those Americans who adhered to the side of the mother-country in the War of Independence. These people emigrated to Canada as being still an English possession, and were known as U.E.’s (United Englishmen).
He met another Powell, Sir John Powell, on his occasion of meeting Prince Leopold, the Duke of Richmond, and the Queen of England.
Before I was admitted to the presence Sir John Powell asked me to see him. I went, and found him with two books before him. He said that the Queen wished to have my autograph in those books on the date of my birth.…
After some short time, the Duke of Richmond giving me his arm, we were ushered into the presence of lier Majesty. We found the Queen standing near the door with Prince Leopold on her right hand. She advanced and said, as nearly as I can recollect the words, ” I Lave sent for you, Mr. Roebuck, so that I might be able to express to you personally my high appreciation of what you have said and done upon the late trying occasions.  I consider your conduct to have been that of a true patriot, and I am glad to have this opportunity of expressing to yourself my
approbation and thanks.”
I, upon this, expressed my sincere and warm thanks “or her Majesty’s goodness, saying that I was amply rewarded for all that I suffered, and I had suffered, because of what I had done, and which had Avon her Majesty’s approval.
Perhaps one of the most important and vocal Roebucks in history.
Of perhaps lesser importance, in 1839, M.D. Hill and Roebuck were involved in a patent infringement case having to do with a new-and-improved ships head, or bathroom.
Arthur Roebuck (1878-1971), another lifelong politician, cabinet minister and senator from Toronto,  championed the civil liberties and rights of Canadians.

The famous Alvah C. Roebuck of Chicago, IL, was a partner with Richard W. Sears in A.C. Roebuck & Company, later Sears Roebuck, 1893.  In 1894 Alvah was concerned about bankruptcy and sold his share for $20,000.   Roebuck continued to work for Sears, and designed one of the first motion picture projector “magic lanterns”.
Even with the downturn of Sears, market cap is still $1.18B.  That $20,000 share would have been worth quite a bit more after a few stock splits, M&As, spinoffs and the recent $900 million sale of its Craftsman brand.
My great great grandparents have the Sears and Buck names, and although I don’t believe I have any Roebuck relatives, it’s interesting to me that the Roebuck name brings the surname graph relationship together.
Buck Roe
0
Previous Post
Next Post