P.T. Barnum is often quoted as saying “There’s a sucker born every minute.” Barnum’s biographer couldn’t find out exactly where the phrase originated, however it was more likely spoken in criticism against him and his customers rather than by himself. 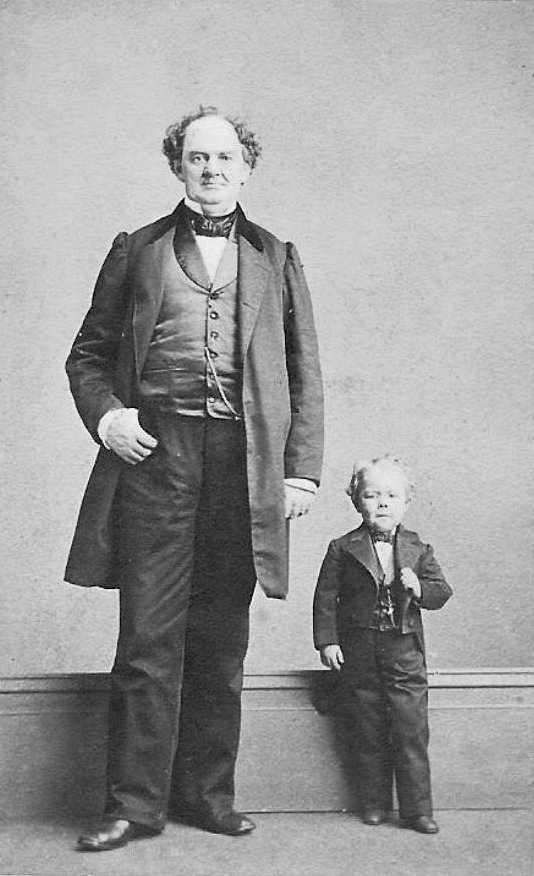 William NUTT was born abt 1698 in Londonderry, Ulster, North Ireland and d. 26 Oct 1751 in Chester, Rockingham Co NH William NUTT was a weaver and ran the first fulling mill at Londonderry NH and later owned it. A descendant, Charles Nutt, wrote: “I have studied the English records of the Nutt family and I have about concluded that the ancestors of William-1 Nutt were in Ireland, probably Aghadoney, County Londonderry, for two or three generations, coming there from England. They undoubtedly descended from the family to which King Canute or Knut belonged. Back in 1100 the name was spelled Knut, Knot, Knutte, etc., but by 1300 it was definitely Nutt or Nutte…”

This post isn’t about P.T. Barnum or William Nutt, who have some ties to our branch of the Sears family tree, it is about a few closer ancestors, including two of Barnum’s employees, one being Commodore George Washington Morrison Nutt (1848-1881).

Commodore Nutt was not a sucker. He joined the circus, made a fortune and was the most kissed man in the United States. He associated with the heads of state, Abraham Lincoln, and European royalty.

He was sometimes mistaken for General Tom Thumb, another circus entertainer and co-worker. Together, they fought for the same woman’s hand in marriage. Tom won.

George Nutt was the best man at Tom’s wedding, which was attended by over 2,000 people including Astors, Vanderbilts, and General Ambrose Burnside. The reception had over 5,000 attendees, and Barnum made $375,000 off them for admission.

Tom Thumb’s funeral years later would be attended by over 10,000 people, though not sure if Barnum was there.
Right around the time Barnum & Commodore Nutt where hanging around with Abraham Lincoln, one of his relatives, Benjamin Franklin Nutt, Sr was hung for being a Confederate deserter. His story is a particularly sad & gruesome tale.

Prior to this event, in 1781, Emmanuel Nutt was court marshaled in New York for desertion.

“The Prisoner Emanuel NUTT, being call’d to and put on his Defence says, that when He absented himself from his detachment he was in Liquor that he has been Twenty five Years in his Majesty’s Service, that he had no intention of deserting, but was afraid to return back ’till some of his Friends, had made intercession with the Commanding Officer in his Behalf. ”

Yet another Nutt, Martin Van Buren, was a civil war soldier. Martin Van Buren (not the Nutt one) was the 8th president of the United States. Not sure if they were related, though I did find a Captain Martin Van Buren Bates, who at 7’11’ and 470lbs was the largest soldier in the civil war. 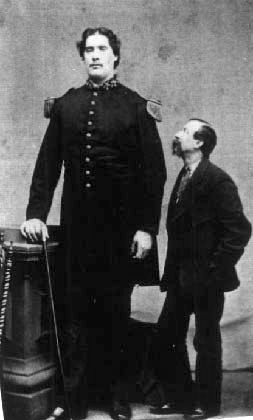 Known as the “Kentucky Giant”, he eventually joined P.T. Barnum’s circus too, visited Halifax, Nova Scotia, and met 7’5” Anna Haining Swan. Together they toured Europe with the circus and eventually got married.

Martin’s watch chimed the hours and was made of 112oz of gold. They tried to have children, unfortunately both sons died at or shortly after birth. One was registered at 18lbs, another at 22lbs.

Back to my immediate ancestry, David Nutt, who led a much more down-to-earth lifestyle.

David Nutt was born June 8, 1805 in Clarenceville, Bedford, Quebec. According to Mitchel & Co’s Canada Classified Directory of 1865-66, David Nutt was a Farmer, Baliff and the Postmaster or Post Office Superintendent of Clarenceville, Quebec. He served as postmaster from 1861-1884. He owned 100 acres of most likely Loyalist granted land. He was married October 16, 1825 to Elizabeth “Betty” Mitchell. At the time, they had 4-5 teenagers manning the farm. Eventually he would have 10 children.

David’s second wife was Aurelie Ratte. The french name was butchered in some documents as Orillia Rattie. They had a son Henry George Sears (1863 – 1933). Henry married Sarah Barr, and they had William George “Bill” Sears (1896-1978) and Margaret Georgena Sears (1898-1929). Bill Sears had 6 children with his wife Louise May Silver (1894-1980), including Velma A. “Bonnie” Sears Ball. Velma married Alfred Bruce Ball (1917-1991) who lived a life quite parallel to my grandfather’s age. They had 3 children. This branch is still living.

There are plenty of places and people with a little Nutt in them. There’s Nutfield, Surrey in the UK. Nutfield Marsh is just to the north. In Clarenceville, Quebec you have Nutt’s Corners, named after the above postmaster.

Located in Missisquoi County, and originally owned by France, the area was named Seigneurie de Foucault and settled by the French after 1727. The land was transferred to British rule after the Treaty of Paris was signed in 1763. The area was leased to Colonel Henry Caldwell in 1774 and called Caldwell’s Manor, then sold in 1742 to Joseph Frederic Allard and renamed Allard’s Manor. In 1822 the name was changed to its current name Saint Georges de Clarenceville, briefly Clarenceville. It resides in the Municipality of Noyan.

Missisquoi is derived from an Algonquin Abenaki word meaning “lots of waterfowl”. One of my ancestors is a Quackenbush. Perhaps a tie-in to the ducks in Missisquoi? Next to find out more about Quackenbush…